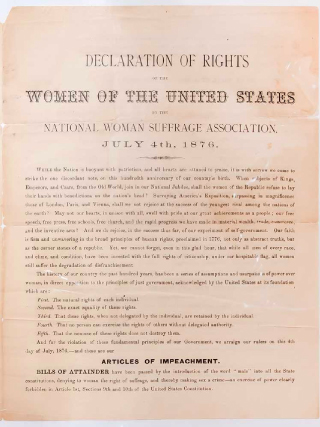 The achievement of women’s enfranchisement in the U.S. was not the straightforward process that some history books would have us believe. No clean line connects the dawning of the official suffrage movement at Seneca Falls in 1848 to the passage of the 19th Amendment in 1920. The documents left behind by women’s rights leaders clearly show this; and they provide valuable evidence of the organizational resourcefulness, intellectual savvy, and sheer determination that helped activists to develop evolving strategies across their seven-decade battle for voting rights.

Nineteenth century Seneca Fall provided fertile ground for social reform.  A prosperous and idealistic community, the utopian movements that emerged there “shared a faith in the perfectibility of people and society….Many local citizens formed and participated in antislavery societies and temperance leagues [and] ran stations on the Underground Railroad” (NPS). So when women were denied key roles in the 1840 World Anti-Slavery Convention, Elizabeth Cady Stanton and Lucretia Mott selected it as the site for the first convention “to discuss the social, civil, and religious condition and rights of women” (NPS). The Seneca Falls Convention of 1848 ignited a more focused women’s movement, and the Declaration of Sentiments and Grievances that was ratified there not only described the injustices faced by women, but called upon U.S. women to organize and fight for themselves. In a culture where women were often denied property rights, had limited access to education and employment opportunities, and were unable to vote, this was a complex order.

Spearheaded by Elizabeth Cady Stanton and Susan B. Anthony, the National Woman Suffrage Association [NWSA] sought to tackle the issue. Soon after its founding, it became the largest women’s organization after the Civil War; and it partnered with powerful men across the country whose legal expertise could guide strategies and whose publications could spread awareness of them.

For the women of NWSA, the key to success was focusing on the vote. Once the vote was attained, women’s voices could shape policies surrounding the other issues. But even narrowing focus down to enfranchisement did not make the path an easy one. 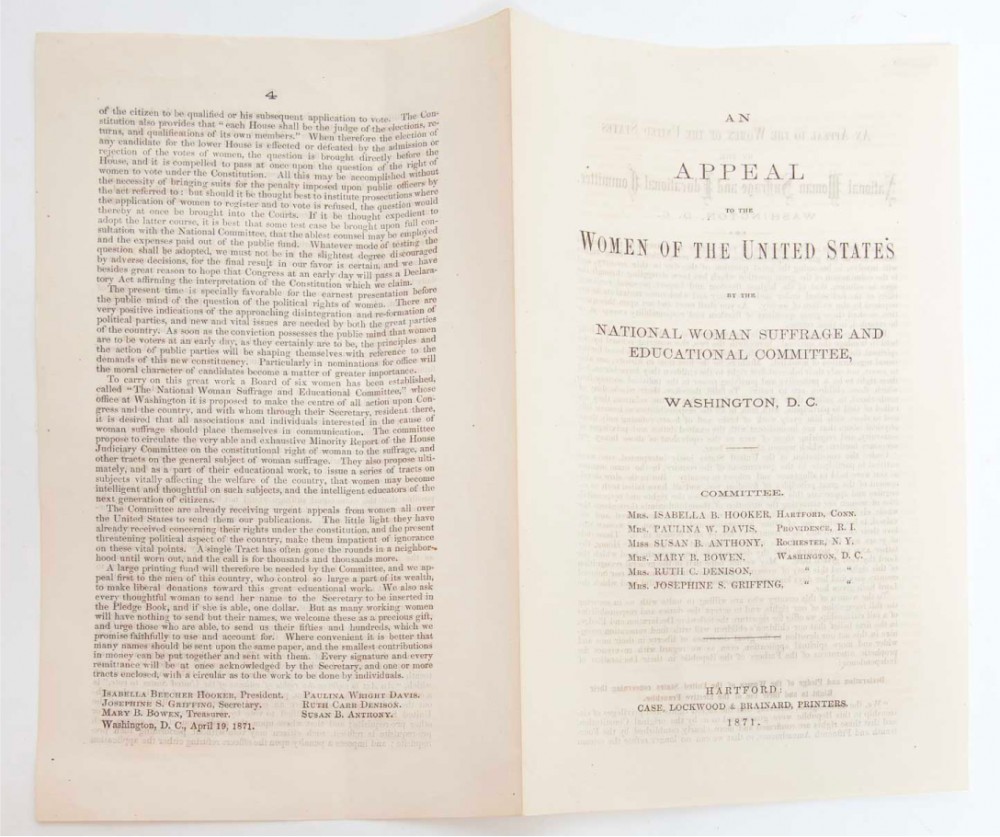 In its early years, the NWSA did not meet its initial goal: the inclusion of women into the 14th and 15th Amendments. By 1871, its leaders released An Appeal to the Women of the United States, in which it announced its next strategy, later named the New Departure.  “Using the equal protections language of the 14th Amendment to assert that women as citizens already had the right to vote…women attempted to vote in violation of state laws. A few were arrested, including, famously, Susan B. Anthony” (Lewis).  This was all according to the NWSA’s plan, as it had encouraged women to assert their rights as citizens, and to sue the government if denied them. As the Appeal to the Women stated: “Our children’s children will with fond veneration recognize this act of devotion to the great doctrines of liberty.”  Even Anthony’s arrest and trial for voting in the 1872 presidential election generated valuable publicity in the beginning. The publication of the trial transcript in 1874 made the debate on women’s rights visceral and accessible, and Anthony’s defense before the court earned her praise among activists as “a representative of liberty.”

Yet the United States v Susan B. Anthony did not give the NWSA its desired result. The court upheld the guilty verdict of Anthony’s trial; and the 1875 Supreme Court case of Minor v Happersett brought the New Departure to a crashing halt. “A unanimous verdict by the court declared…that while women were citizens, suffrage was not a ‘necessary privilege and immunity’ to which all citizens were entitled” (Lewis). The NWSA headed back to the drawing board. 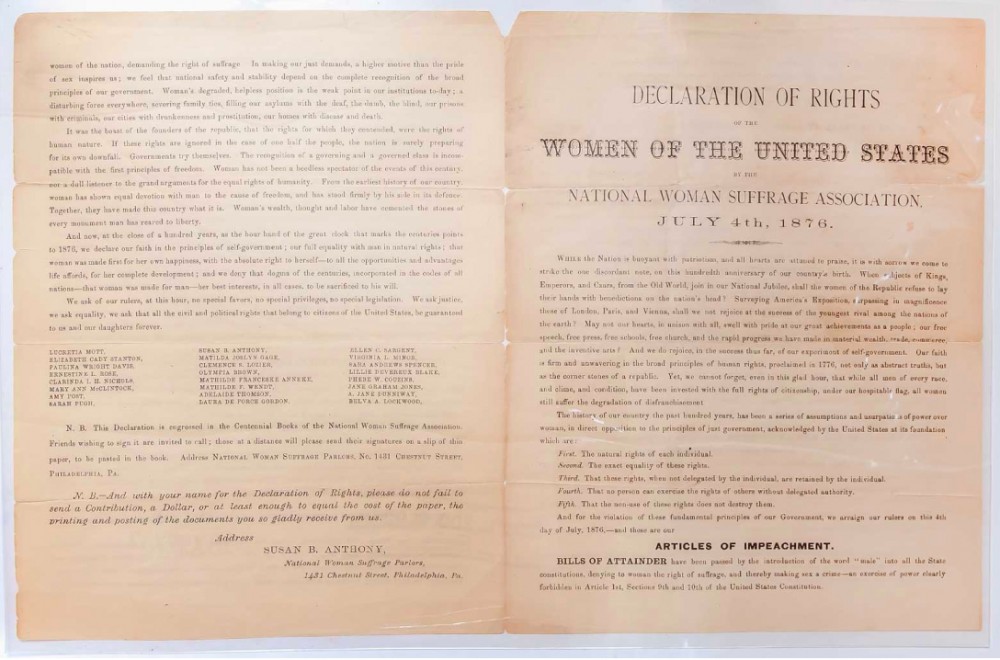 The approaching U.S. centennial of July 4, 1876 would be crucial to the NWSA’s new strategy: a Declaration of Rights of Women of the United States. Matilda Gage, Susan B. Anthony, Lucretia Mott, Belva Lockwood, and a host of other activist leaders approached the committee of the Centennial International Exposition in Philadelphia to speak at the event.  The committee’s refusal to allow their presentation of the Declaration of Rights at Independence Hall fueled their resolve. “Determined to have the final word, Anthony and four cohorts managed to obtain, at the last moment, passes for admission to the ceremony. At the conclusion of the reading of the Declaration of Independence, Anthony rose from her seat…climbed onto the stage, and presented to a bewildered presiding officer…the [Declaration of Rights of the Women of the United States]. The document was prepared and signed especially for the occasion by the most prominent advocates of woman’s enfranchisement. After scattering hundreds of printed copies of the address throughout a curious crowd of onlookers, the women retreated from the hall. Outside…Anthony, before an enthusiastic crowd of listeners, read the famous Woman’s Declaration” (Cordato).  The words of the Declaration were unequivocal and powerful, and in reading them, Anthony opened the doors to the next step in the women’s suffrage movement: the drafting and pursuit of the 19th Amendment guaranteeing women’s enfranchisement. “Now, at the close of a hundred years, as the hour hand of the great clock that marks the centuries points to 1876, we declare our faith in the principles of self government; our full equality with man in natural rights…and we deny the dogma of the centuries, incorporated in the codes of all nations—that woman was made for man… We ask justice, we ask equality, we ask that all the civil and political rights that belong to citizens of the United States, be guaranteed to us and our daughters, forever.”

The Declaration brought the NWSA over 10,000 petitions on behalf of suffrage, which were presented to the Senate. By 1877, the NWSA had begun lobbying for a federal constitutional amendment for women’s rights; and by 1887 it merged with other women’s groups to form the larger National American Woman Suffrage Association [NAWSA], which would doggedly continue its pursuit until the ratification of the 19th Amendment in 1919 and its enaction in 1920.

Not all pieces of this history survive. The Declaration of Sentiments (1848) signed by representatives including Mott, Stanton, and Frederick Douglass has been lost; and it is the subject of an ongoing search led by the Library of Congress and Smithsonian Institute. Those documents that do exist are often incredibly rare, exciting dealers, collectors, and historians alike when they emerge. Among these are An Appeal to Women of the United States (1871), An Account of the Proceedings of the Trial of Susan B. Anthony (1874), and most exceptional of all, the Declaration of Rights of the Women of the United States (1876).

Cordato, Mary Frances. “Toward a New Century: Women and the Philadelphia Centennial Exhibition, 1876.” Pennsylvania Magazine of History and Biography 107 (January 1983): 113–35.