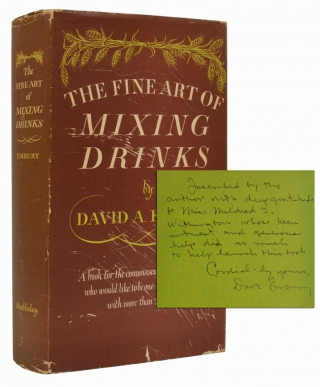 Cocktails and story telling go hand in hand. While the consumption of spirits at its best can lead to what Oscar Wilde called “the musings of great minds,” the etymology of the term itself is also wrapped in oral history and questionable narrative. At times attributed to English sailors’ translation of the Mexican phrase “cola de gallo,” at others linked to a French tavern owner’s signature garnish of a rooster’s tail-feathers, even authors such as H.L. Mencken got involved in conjecturing about the cocktail’s origins (per Mencken, the term was derived from a combination of “cock” that signified the tap on a spirit cask and “tail” signifying the last dregs that needed a mixer in order to fill a glass).  While we may never know the exact story, what historians, scholars, and bartenders agree upon is that the cocktail was officially defined in Hudson, New York’s Balance and Columbian Repository of 1806, when in response to a reader’s letter, an editor replied “a cocktail is a stimulating liquor, composed of spirits of any kind, sugar, water, and bitters.” Its origins hazy, the cocktail as a category was now defined.

Since 1806, cocktail culture has spawned numerous important texts; and in addition to passing along recipes or teaching proper methods, these books tell stories about how the people and places surrounding the cocktail evolved over time. Infamous among bartenders is Jerry Thomas’ 1862 “How to Mix Drinks, or the Bon Vivant’s Companion,” otherwise known as the world’s first cocktail book. As one would expect, the 56 year lag time between the Balance’s broad definition of the drink and Thomas’ guide suggests that cocktails had both gained popular traction, and needed more specific definitions to assist the customers ordering and the bartenders creating libations. Thomas had extensive experience in the field. A career bartender, Thomas was a fixture at the Occidental Hotel, where he gained notoriety for blending “craftsmanship and showmanship, epitomized in his signature drink, the Blue Blazer, a pyrotechnic showpiece in which an arc of flame passed back and forth between two mixing glasses. At the Occidental, Thomas was earning $100 a week, more than the vice president of the United States” (Grimes).  His reputation lent him authority enough to write and sell his successful book—but the vagueness of some recipes is also telling. Thomas’ success was founded on the spectacle of his drinks, and on the novelty of clientele only being able to obtain those cocktails from him. “How to Mix Drinks,” then, tells the story of an emerging and competitive pre-prohibition cocktail culture where bartenders were beginning to seek out each other’s expertise while remaining wildly suspicious that the exchange of ideas might put them at a disadvantage. Thomas succeeded in this balancing act.

Another 38 years ahead in time, and the cocktail literature tells a new story. The publication of William Boothby’s “The World’s Drinks and How to Mix Them” traces a move away from the idea that a single bar or single bartender is to be celebrated for its innovation. Boothby—who used “Cocktail” as his middle name—highlighted that to be a “premier mixologist” not only required individual creativity, but a global knowledge and in-depth understanding of what methods and ingredients other bartenders used. The revised edition of 1908 gained notoriety for having the first recipe for the dry martini and the Sazerac, for which this edition’s cover touts Boothby as the world’s “standard authority” in the field.  In an increasingly mobile world, being shaped by railways, ocean liners, and the birth of the automobile, cocktail consumers wanted access not only to a local bartender’s creations, but to a bartender who could replicate drinks they had consumed in any other city of the world.

Prohibition may have limited alcohol sales and consumption in the U.S., but cocktail manual production persisted. These DIY books assisted average citizens in using mixers to extend the life of their limited alcohol caches, or even provided instructions for making home brews. By the time David Embury published his influential “The Fine Art of Mixing Drinks” in 1948, Americans were craving a sense of professional polish in their cocktails to counter the difficult drinking years of Prohibition; they also craved a level of cosmopolitanism after WWII, during which time young men from even the most rural states had been exposed to the jazz clubs and zinc bars of Paris and London. Embury’s book promised to bring back sophistication. With its witty, conversational tone and its clear division of cocktails into two identifiable types, “The Fine Art” invited both professional and home bartenders to see their creations as art, as craftsmanship, and as something more elegant than a means to inebriation. In a post-war world, cocktails and the fine people drinking them were a sign of enduring human civility.

Today, Thomas’ “How to Mix Drinks” and Embury’s “The Fine Art of Mixing Drinks” are considered critical to the foundation of today’s modern mixology movement, and they are two of the field’s rarest books.