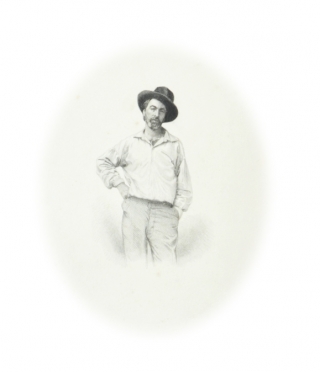 This is the common air that bathes the globe. - “Song of Myself”

In 1855, in the small shops and stalls of New York, a slim, tall, elaborately fashioned volume appeared on shelves. The book was void of apparent authorship, featured intricate blind-stamping, gilded titles on front and back covers along with heavy gilding of the spine, exquisite gold edging on marbled end paper, a picture of its author—brutishly hairy, but charming nonetheless—inside the cover, and twelve highly stylistic poems. The great American poet had arrived; the great American lyrical style, stripped of all British and European dramatics, was born. Walt Whitman, with his first edition of Leaves of Grass, planted a frank and mystic seed, one that grew, great, tall, and deep into the very fabric of American culture; one that he watered and pruned every day until his passing.

Over the next thirty-seven years, Leaves of Grass would go through nine editions (six if we are feeling prudish), culminating in Whitman’s final “Deathbed” edition. In modern society, a first work, especially one of no known reputation, may find its way through to a second edition, perhaps even a third, but rarely does a work continue past that; more importantly, rarely does a work continue to grow and change past that. In many cases we might agree that any successive edition is simply the minute refining of its predecessor—neither more nor less than it was before. Whitman, with his second edition, “…began his lifelong practice of adding new poems, reworking previously published poems, and reordering poems into different groupings,” says Harold Aspiz in his examination of the second and subsequent editions. And so it was that Leaves of Grass, quite dissimilar to the bric-à-brac bushes sprouting about it, grew to an enormous and encompassing scope—“Whitman saw his work as an organic, living body” says scholar Matt Miller. And though we may find a certain pleasure in distinguishing, tracing, and otherwise dissecting Whitman’s changing Leaves, what draws my interest is the seed, the small sprouting first edition and all the components therein. With sharp eyes and gentle hands, let us take up the seed and inspect its natural features, however brittle, winding, or obscure they may be.

The most immediately striking feature of Leaves is Whitman’s creative and liberal use of certain punctuation marks and techniques. We find that Whitman favors the ellipsis (…) nearly as much as other marks, if not more. Where the coma, period, semi-colon, and others are being used for obvious effect, the ellipsis plays a unique role. Whitman uses this mark to create a sense of pointing, of leading on to the next idea (ex. “A few light kisses…. a few embraces…. A reaching around of/arms/…”). In such a way the words gain a unity and equality; all the words, ideas, and feelings become connected, moving at once, and equal in their representation. In relation to this notion of unity, the narrative voice—being either Whitman himself, for at times it undeniably is, or an omnipresent first-person I—becomes the next striking feature. The narrator makes frequent moves to (1) examine the local and universal—in love, existence, and death—, taking great pains to travel nimbly and sympathetically through and between the different scopes; (2) use the omnipresent first-person I to witness, participate in, and relate activities otherwise inaccessible; and (3) align himself to the common American individual. The first move presents our narrator as approachable yet knowledgeable, for he knows about my street and the happenings there, but also knows of all happenings on all streets—this begins the relationship between the reader and narrator, and all readers and narrator. The second move allows the reader to witness the movements in other lives through the eyes of the omnipresent narrative I—breeding a certain kinship between the reader and the rest of humanity. The third is perhaps the most telling; it speaks to the narrator’s unequivocal and undying love, not only for America, but for the American people, and his desire to be of, for, and among them—this part becomes essential to the tone of the work, ever developing the notion that “Great is the greatest nation… the nation of clusters of equal/nations” from “Great are the Myths.”

Whitman favored the “American” experience. He thought it especially desirable compared to the foppish European way of life. To some large extent, he himself lived and encapsulated the American dream. For the years preceding Leaves, Whitman variously worked as a carpenter, editor, journalist, and typesetter. It was these experiences, these vocations that grew the myth of America—perhaps it was a truth back then—great in Whitman’s mind. He saw America as the pinnacle of all countries combined, and the American people—native or otherwise—as undoubtedly the most exalted people in existence. Here we may assume that these feelings grew from an idea that New York was a representative microcosm of the whole, complete in all glorious variety; for though Whitman may have traveled some, New York was the basis of his experiences. Daily seeing the greatest of all living peoples, learning their stories well, and desiring to be the poet of and for them, the narrator goes on, in the span of some thirteen pages within “Song of Myself” to mention and compare himself to the artists, blacksmiths, builders, butcher boys, carpenters, chemists, children, conductors, connoisseurs, coon-seekers, deacons, deckhands, duck-shooters, floormen, fugitives, gentlemen, immigrants, lovers, lunatics, machinists, the married and unmarried, negros, novices, opium eaters, pavingmen, pedlars, pilots, presidents, prisoners, prostitutes, quarkers, spinning-girls, steerers of ships, and Yankees. With these comparisons we see plainly the narrator’s desire to know, penetrate, commiserate with, and sympathetically represent all levels and creeds of society. “The United States themselves are essentially the greatest poem…. [And] it awaits the gigantic and generous treatment worthy of it,” says Whitman in the preface added to later editions. 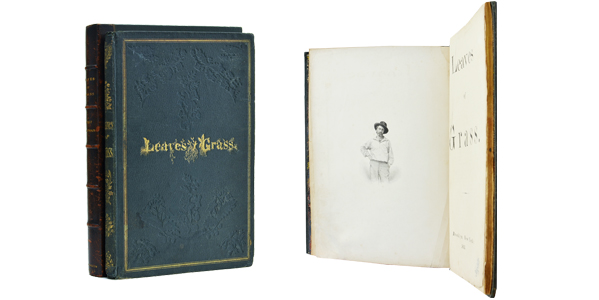 The interest in such a large project has its roots, as Herbert Bergman says, in Whitman’s journalistic work. “His absorption of the phenomena of America helped him to become the representative, all-embracing man of Leaves of Grass, the all-inclusive ‘I.’” says Bergman. “As a journalist, Whitman came to know, and reacted to, America in close detail; as a journalistic social critic, he saw America's deficiencies. To remedy these deficiencies and to enable America to realize its potential, in his poetry he presented himself as representative of all selves, as a new, or re-created image of America…” If we come to see Leaves, even on some small scale, as a journalistic project, then we can understand Whitman’s desire and subsequent efforts to document his growth alongside the personal, spiritual, and industrial growth of the people and country he loved so well. Says Bergman, “What the journalism contributed to Leaves of Grass, in short, was a distinctively American perspective. As an American journalist, Whitman uniquely prepared himself to write the ‘autochthonic’ poems which he felt democratic America needed…” With this journalistic motivation in mind, it is little wonder that Leaves changed with the country and grew in scope with the country over all its various editions; it is little wonder that so many editions were needed!

The great winter, the time of retreat, the moment of stasis and hibernation came to Leaves only with the death of Whitman, and his generation alongside him. Ultimately the many editions of Leaves may be understood as yearbooks tracking the growth of Whitman and his people and nation; a love-letter of sorts. But in the seed, in the first edition, in the skilled yet elementary scribbles of that first love-letter, we see Whitman proving his love for his America through the subtle yet innovative use of punctuation, and we further understand his great growing Leaves, and the seed that began it, through his journalistic works and all the beautifully curious moments and people therein. “A great poem,” and subsequently a poetry collection, “is no finish to a man or woman but rather a beginning,” says Whitman. And with that his leaves are no less finished than they were in his “Deathbed” edition, for his leaves, ultimately are not confined to printed lines and sheets of paper, but live on in the American spirit; they find growth in the America of today.

This is the common air that bathes the globe. - “Song of Myself”