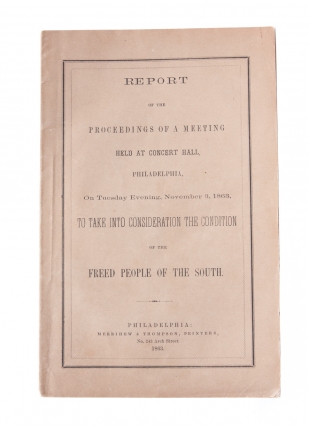 As Charlotte Forten first approached the landing at Hilton Head, South Carolina in 1861, she marveled at what she saw. The land-head is “desolate enough, --a long, low, sandy point stretching out into the sea, with no visible dwellings upon it, except the rows of small white-roofed houses which have lately been built for the freed people.” But soon she noted more detail: “These trees are the first objects that attract one’s attention here: not that they are finer than our Northern oaks, but because of the singular gray moss with which every branch is heavily draped.” Forten was one of many dozen Northern volunteers—teachers, doctors, ministers—who traveled south to the Hilton Head area to participate in a significant experiment with profound implications: Port Royal Island was home to around 8,000 formerly enslaved Black Americans who, after the Union Army drove out Confederate soldiers and white planters from Port Royal and neighboring islands in November 1861, had control of land, crops, and themselves.

It was a landmark moment of self-reliance after centuries of enslavement. Farther away from Port Royal, the US Government and Northern abolitionists hoped that Port Royal could be a test-case to support what came to be the most radical restructuring of nineteenth-century U.S. culture: the abolition of slavery. White planters and other slavery-apologists spread and spread pernicious lies that Black people were incapable of self-reliance and thus enslaving them was not only necessary but generous. Port Royal could offer tangible and visible proof against one of the bulwark arguments for maintaining the system of chattel slavery in the United States.

But as Forten’s quote about the trees points out, different regional perspectives presented particular challenges. It wasn’t just that trees were different (Northern oaks superior, Southern oaks inferior). Ideas about labor, about self-reliance, about freedom itself were different not just with respect to region but to Black and white Americans as well. Early in the Civil War, Port Royal represented a moment of profound hope. With support and clearance from the Treasury Secretary, Northern abolitionist groups from Boston, New York, and Philadelphia recruited, organized, and sent volunteers to assist the black denizens of Port Royal. Additionally, these groups raised funds to support the multifaceted experiment.

Records of this multifaceted work survive in a number of pamphlets that abolitionist aid organizations published and printed. These documents provide valuable information about the Northern leg of the Port Royal project that complement published memoirs and other personal recollections. For example, Charlotte Forten, the free Black educator from Philadelphia whose quote about trees appears above, kept a diary of her time as a teacher in Port Royal; she published extracts in The Atlantic Monthly in May-June 1864. At the same time that Forten worked on the island itself, Northern abolitionist societies were hard at work supporting Forten, her peers, and the Port Royal citizens. These records showcase the business and organizational efforts of the abolitionist aid movement.

The First Annual Report of the Educational Commission for Freedmen, May, 1863 is a cogent and comprehensive overview of this committee’s multifaceted work with and on behalf of Port Royal. 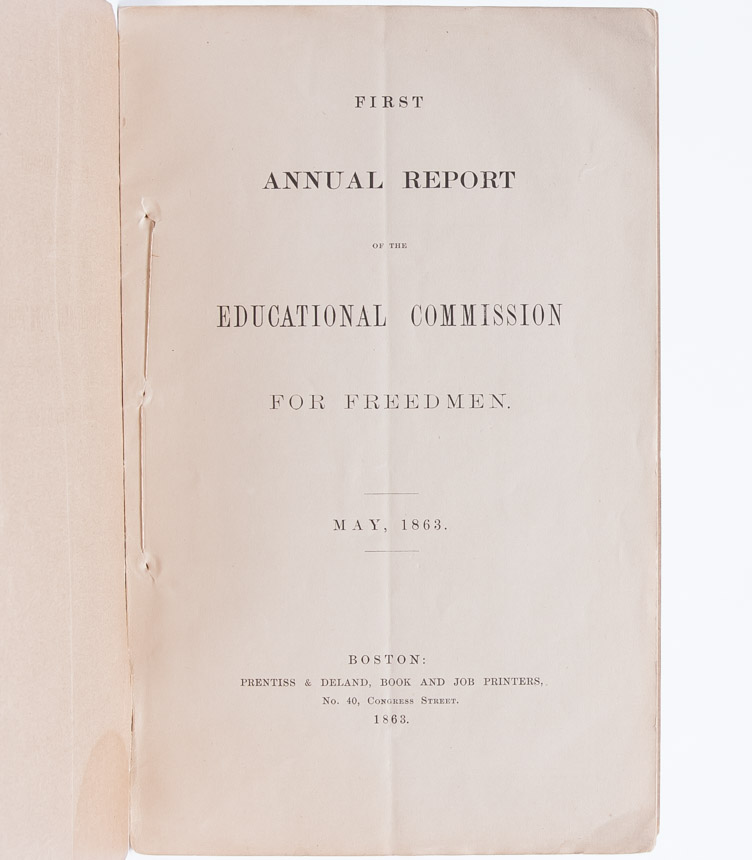 This first report contains the commission’s constitution (which establishes committees, rules and protocol, and related items), personnel lists of sub-committees, and summary reports of each sub-committee’s goals and activities. In addition to activities, fundraising, and names, these reports provide insight into the Educational Commission’s motivations and assumptions for their work. Much like the larger debates around racial equality, their motivations reveal complicated ideas about equality that were tempered by widespread assumptions about black inferiority. In Secretary Edward Atkinson’s report, at the same time that he writes hopefully of helping Port Royal denizens purchase land, he offers a qualifying clause about this hope: “[Our project] is intended to sell a large portion of the plantations purchased, to the freedmen at cost, as fast as they shall prove, by industry and frugality, that such a course will beneficial to them” (9). Lurking at the end of this sentence is a tacit upholding of American inequality: that the Black citizens of Port Royal must first prove that owning and farming and laboring on land “will be beneficial to them.” Many white abolitionists were fervently devoted to the antislavery cause. But such dedication did not mean that they were free from racial prejudice. The Port Royal Experiment was a project with aspirations of equality built on a troubling foundation of racial paternalism.

Like abolitionists in Boston who banded together in support of Port Royal, Philadelphians took up a similar mantle in 1861. The Port Royal Relief Committee undertook educational, labor, and religious support through the volunteer organization, fundraising efforts, and publicity campaigns. 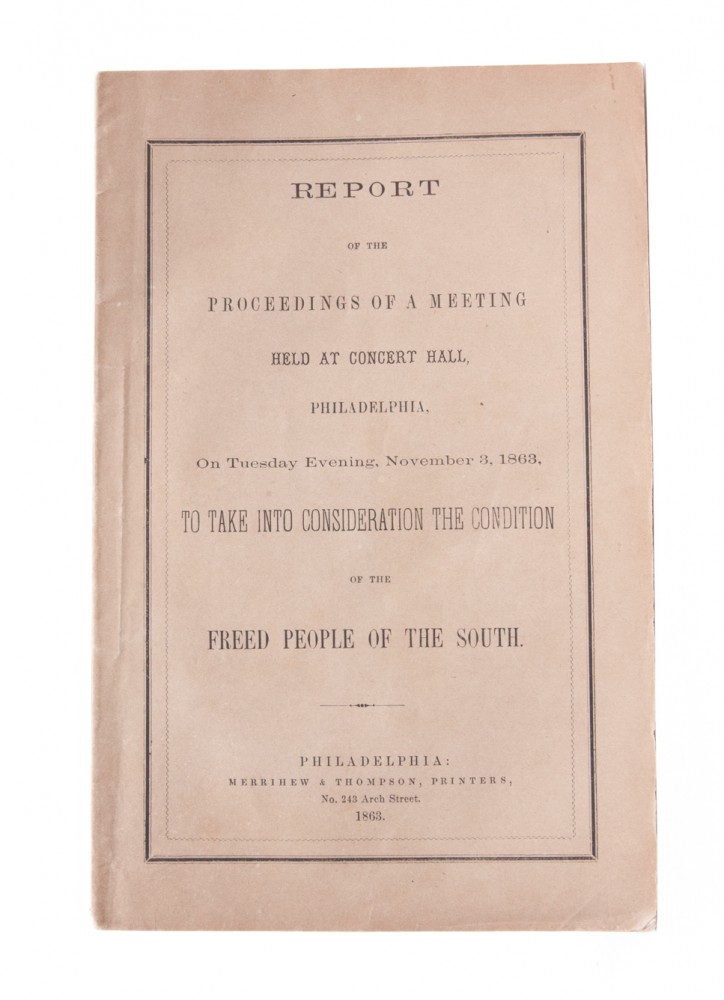 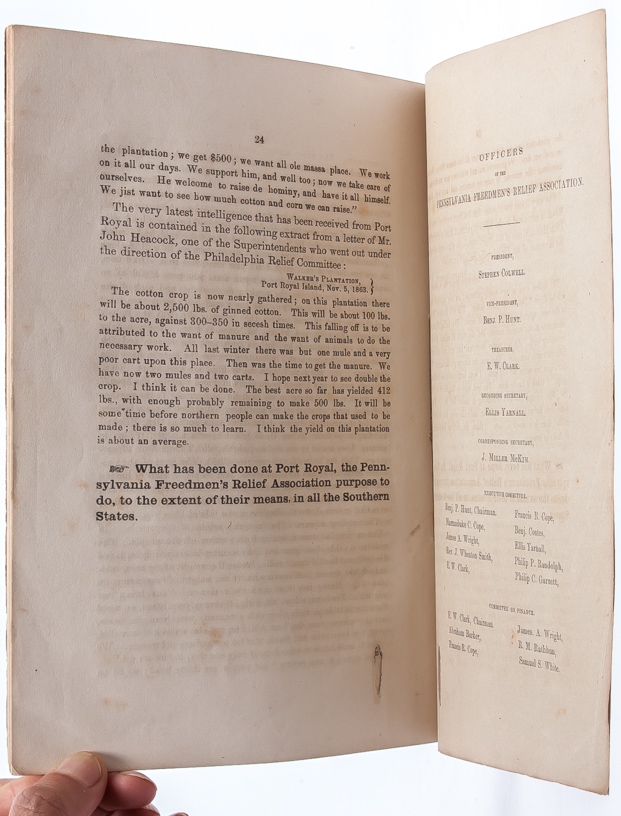 Like Boston, Philadelphia was an abolitionist hotbed. The city also boasted a vibrant, strong, and populous free Black community. (Charlotte Forten, the author of the Atlantic Monthly letters, was the daughter of James Forten, a pillar of free Black Philadelphia. Charlotte later married into the famous Grimké family, thus uniting two major abolitionist families through marriage. She is mentioned by name, along with her father, on page eleven of the pamphlet.) After the 1863 enactment of the Emancipation Proclamation, the Port Royal Relief Committee expanded their focus to support freed Black citizens throughout the South; accordingly, the Committee changed their name to the Freedmen’s Relief Association. Where the pamphlet from the Boston-based Educational Commission focuses solely on Port Royal, the Philadelphia-based Freedmen’s Relief Association extends its reach from Port Royal throughout the South. The Report of the Proceedings describes specific efforts in contraband camps (contraband was the term for enslaved persons who escaped and sought protection by the Union Army) in Washington D.C. and Fort Monroe, Virginia. The general sense of the Philadelphia Report of the Proceedings is that the work to be done is only getting greater and more important, but that Port Royal, in the words of one speaker, is a “beacon light on the dark coast of our tempest-tossed political sea” (9).

The Freedmen’s Relief Association pamphlet prints many of the speeches from that November 3, 1863 meeting. What differentiates the tone of the Philadelphia document from the Boston one is that the Philadelphia Freedmen’s Relief Association speeches are largely persuasive in nature; where the Boston reports are summaries of previous and current sub-committee activities, the Philadelphia speeches establish goals and aspirations for the work ahead. And in the wake of the January 1, 1863 Emancipation Proclamation, Lincoln’s executive order that in effect emancipated all remaining enslaved persons residing in states that had joined the Confederacy, the Freedmen’s Relief Association expanded their efforts from Port Royal to a broader scale. One speech, by James Miller McKim an abolitionist remembered for being the destination of Henry “Box” Brown’s self-emancipation shipment (he mailed himself out of enslavement), represents the forward-looking perspective: “But I need not multiply illustrations of what has been developed by this great Port Royal movement. Suffice it so say, its history constitutes one of the most instructive chapters in the annals of our country. It is a chapter that has been read, studied and reproduced in England and France, and that with the greatest advantage to our national cause, and to the cause of popular liberty everywhere. Now, Mr. Chairman, for the moral of these statements: What has been done at Port Royal, can be done at Memphis. What can be done for South Carolina, can be done for Tennessee; and what can be done for both these States, can and ought to be done for all the other States of the South similarly situated” (11). There is even some Philadelphian chauvinism: “Shall we wait, as has been our bad habit in times past, for New York or Boston to take the initiative? Why should Philadelphia wait for the lead of either of these cities? Let us be true to our traditions” (13). The Report of the Proceedings is a valuable compilation of persuasive speeches that have a broad perspective and excited tone.

For all the hope and promise, Port Royal would end up falling victim to the persistence and indeed resurgence of structural racism. The Experiment ultimately collapsed with the succession of Andrew Johnson to the presidency and the de-funding of Reconstruction policies. But for more than five years, Port Royal held enormous potential for Black citizens in the Sea Islands and around the country as well as white allies. Northern abolitionist organizations stepped in to offer support in terms of volunteers, material goods, and funds, but with those donations came a sense of responsibility and control. What was a power vacuum in 1861 became a power struggle over the next five years. The Boston-based Educational Commission for Freedmen and the Philadelphia-based Freedmen’s Relief Association printed reports that offer windows into the complex beliefs, practices, and ideals that defined the national response to the events and lives in Port Royal.

First Annual Report of the Educational Commission for Freedmen May, 1863. Boston: Prentiss and Deland, 1863.

Report of the Proceedings of a Meeting Held at Concert Hall, Philadelphia, On Tuesday Evening, November 3, 1863, to Take into Consideration the Condition of the Freed People of the South. Philadelphia: Merrihew and Thompson, 1863.