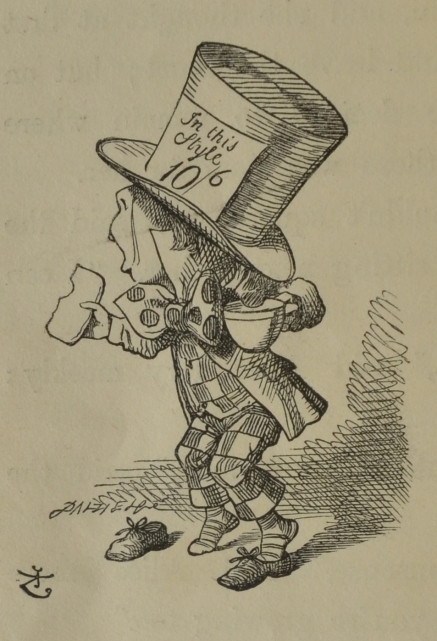 “I’m afraid so, but let me tell you something… the best people usually are.”

A professor of mathematics at Christ Church College at Oxford University, Charles Dodgson was fascinated by puzzles of logic. While at the University, he developed a close friendship with the young daughters of the college dean, Henry Liddell, and often amused them by developing games and puzzles that challenged and grew their intellect. One golden afternoon in July of 1862, he took them boating with the Reverend Duckworth and told them a story of a young girl’s adventures in wonderland. One of the girls, Alice, begged Dodgson to write down the story for her, and so he did.

Dodgson’s “Alice’s Adventures in Wonderland” were written and recited to Alice and her sisters, Lorina and Edith, later that year. It was so well received that Dodgson began to show the manuscript to other children and further develop the story from 15,000 to 27,500 words. In 1865 Dodgson published the story under the pen name, Lewis Carroll, with accompanying illustrations by John Tenniel, a popular contemporary cartoonist. The book was praised and sold well, and soon translated into French, German, and Italian.

Today when one visits the Christ Church meadows, rows down the Isis, or wanders the college corridors, it is quite easy to imagine the inspiration behind Dodgson’s creation. The nineteenth century Victorian standards, normally stiff and formal, were instantly freed outside the college walls where one could wander the meadows and enjoy the summer sun shining on the tall grass, the emerald waters of the river, and wildflowers waving in the breeze.  The friendship that developed between Dodgson and Liddell’s daughters was not uncommon for Victorian times – men would occasionally prefer the companionship of young girls, who were not bound by the same patriarchal conventions that society demanded. Vowed to a life of celibacy as an Oxford lecturer, Dodgson was far from the conventional masculine ideal. He was a shy and stammering man who held a tall, gangly frame. He came to Christ Church College in 1850, residing there for the rest of his life as an academic and working in the field of mathematics.

While he is still esteemed in mathematics, Dodgson is most praised for his writing as Lewis Carroll, and for crafting “Alice’s Adventures in Wonderland.” Why is it that this story has captured the imaginations of millions of children and adults alike? Why does it continue to be cherished, re-imagined and re-interpreted even a hundred and fifty years after its publication? While the answer might differ from reader to reader, the unique literary “nonsense” aspects of “Alice” demonstrate its enduring intellectual integrity.

The use of the literary nonsense genre was nothing new to Victorian society. In order to pass the day in sitting rooms puzzles, riddles, and games were crafted to entertain company and challenge family members of all ages. Writers occasionally incorporated these riddles into their stories, and in some cases, they became the foundation of the work. When studied in literature, the primary characteristics of the “nonsense” genre is the employment of elements of logic, such as puzzles or riddles, that are essentially balanced by negations. The scholarly study of this particular type of literature was not genuinely pursued until the mid-twentieth century, even though the wit and intellect of the “nonsense” authors were readily appreciated by their contemporaries.

The goal of nonsense literature, ultimately, is to combine the sense with the non-sense – to intertwine logic and the lack of logic by using wit, symbols, or puns. Sometimes these puzzles have deeper meanings, often times they do not, as is the nature of nonsense. The primary examples of nonsense appear in the Mad Hatter tea party. One riddle in particular, posited by the Mad Hatter, exemplifies this spirit.

“I haven’t the slightest idea,” said the Hatter.

Alice sighed wearily. “I think you might do something better with time than wasting it in asking silly riddles.”

Alice, like many readers, became so frustrated at the lack of an answer to the Mad Hatter’s riddle that Dodgson was compelled to later write in response:

“‘Because it can produce a few notes, though they are very flat; and is nevar put with the wrong end in the front!’ This, however, is merely an afterthought: the Riddle, as originally invented, had no answer at all.”[1]

When reading this letter, many readers, automatically correct ‘nevar’ to ‘never.’ However, this is a significant part of the answer, as ‘nevar’ is ‘raven’ backwards! Ultimately, as is the frustrating nature of nonsense, Dodgson’s answer is exactly as stated above: there is no answer. For the Mad Hatter to have had an answer would have undermined his nonsensical nature. The frustrating brilliance of this riddle is that there is an answer that can be surmised, although it functions in the story for quite another purpose.

Continuing with the scene, the Dormouse is startled out of his sleep by the Mad Hatter’s exclamation long enough to tell a riddle of his own. Dodgson cleverly portrays the Dormouse as always asleep due to the origin of the word “dormouse” as “dormeus,” which means “sleepy (one).” The Dormouse tells a story of three sisters, Elsie, Lacie, and Tillie, who live at the bottom of a treacle well and only ate treacle.

“That’s impossible,” Alice exclaimed, “They would have been very ill.”

“And so they were,” said the Dormouse, “very ill.”

“But why did they eat only treacle?” asked Alice.

“It was a treacle well,” replied the Dormouse.

“There’s no such thing,” said Alice, “and even if there was such a thing, what were they doing there?”

“Learning to draw,” replied the Dormouse.

Alice was getting crosser by the minute. “But how can you draw treacle?” she demanded.

“You can draw water out of a water-well,” said the Hatter, “so I think you could draw treacle out of a treacle well. You really are very stupid, Alice.”[2]

The three sisters depicted in the Dormouse’s story are the Liddell sisters themselves: Lacie is an anagram for Alice, “L” and “C,” which sound out “Elsie,” refer to Lorina Charlotte, and Tillie is a corruption of Matilda, the family name for Edith. Treacle, which was an ancient term referring to a healing antidote, also refers to a sugary syrup. St. Frideswide is a Catholic saint of healing and the patron saint of Oxford, whose church was incorporated into the Christ Church Cathedral and whose “healing spring” is in Oxford. The treacle well, then, is a sly reference to St. Frideswide’s well, which Alice and her sisters would have understood, while also teasing them with the nonsense of the three girls living in a well of syrup and learning to “draw.”

“Alice’s Adventures in Wonderland” is filled with countless examples of nonsense and witty allusions to Dodgson’s contemporary world (some, perhaps, still undiscovered). These charming little bits of fun are a major reason why the story has struck a chord with so many readers and remained in our hearts and minds for the last 150 years. The humor and playfulness entices younger readers, but the depth and intelligence of the writing captivates an adult reader. With both, you have a classic that appeals across generations.

[2] Abridged version of the scene